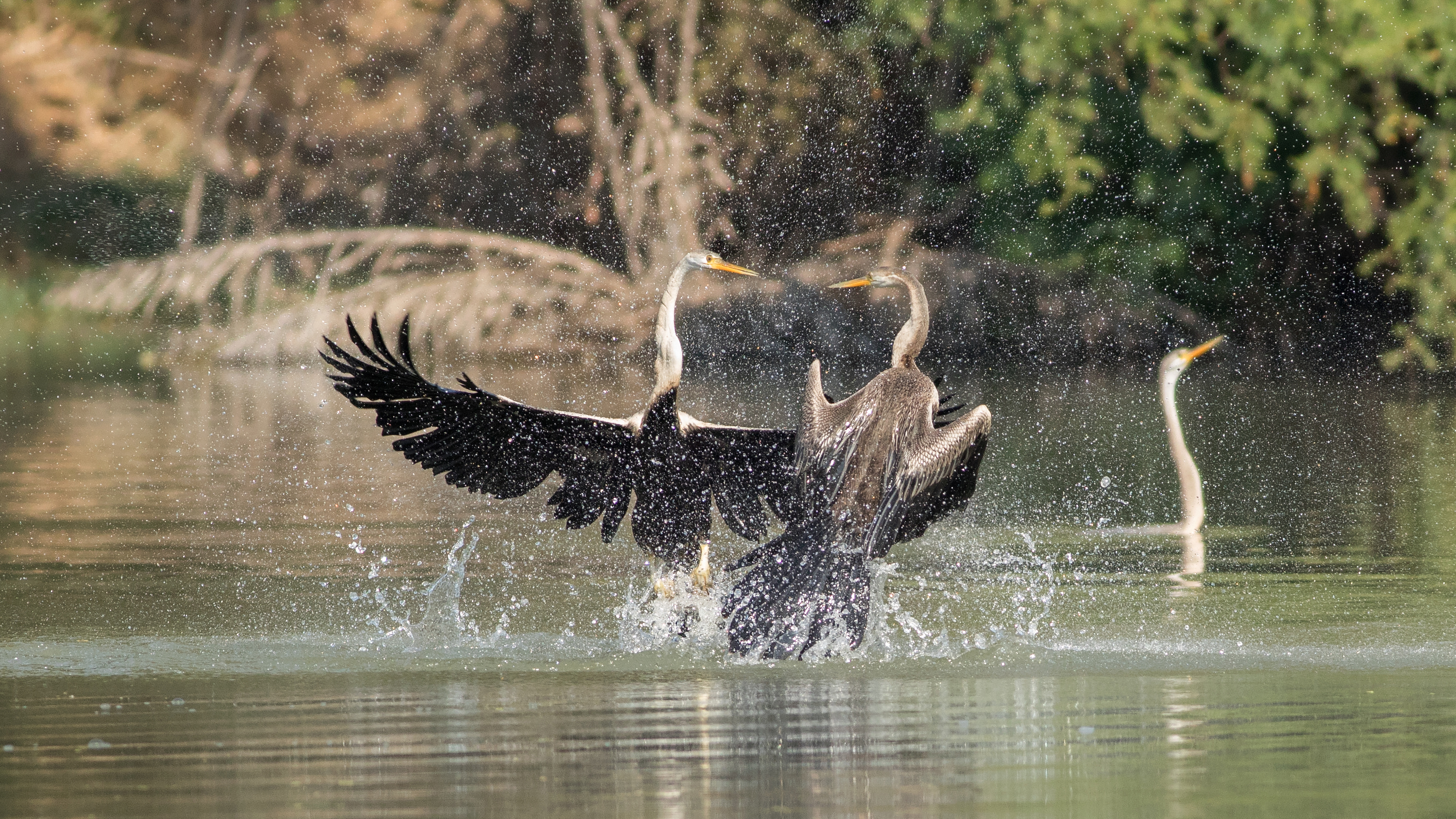 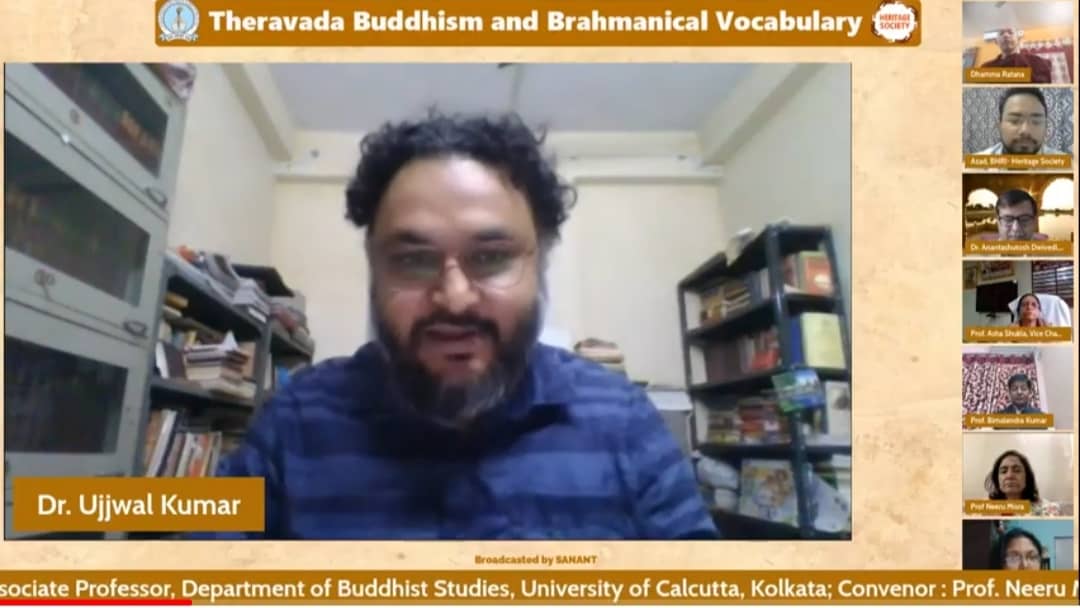 The  Buddhist Heritage Research Institute of Heritage Society, Patna (Bihar) in collaboration with Lord Buddha and Cultural Heritage Studies Chair of Dr B. R. Ambedkar University of Social Sciences, Mhow (MP) organised a Special Lecture on ‘Theravada Buddhism and Brahmanical Vocabulary’. The webinar majorly began with the aim of bringing forth the significance of the methodical usage of certain terminologies appearing in Buddhist Literature.

Under the patronship of  Prof. Asha Shukla, Vice-Chancellor, BRAUSS the webinar commenced. Prof. Shukla delivered the introductory speech providing a brief about the key components of the theme of the webinar. She explained further about the discipline of Terminology which enables individuals in comprehending the linking between the elements of imperative texts and the context. Uplifting the implication of the terms used in both Theravada Buddhism and Brahmanical Vocabulary, the webinar proceeded. She also mentioned how the esteemed scholars will be speaking about the aspect of the addition of new words in the Indian Dictionary which resulted in the usage of many ritualistic words converting them to ethical behaviour.

The invited speaker, Dr. Ujjwal Kumar, began with a detailed presentation on the vocabulary of Buddhist and Brahmanical Literature. He gave an elucidating explanation of Brahmanical influence on Buddhist literature. Some of the major key points of his presentation are him explaining the origin of certain terms observed in Buddhist texts which were adopted from Brahmanical Literature. He further demonstrated how the words are divided into five categories based on their meaning and usage. Also, in terms of its context, he emphasized particularly the importance of the Moun (silent) variation. He expounded Lord Buddha’s interpretation of various mantras, the Gayatri Mantra, for instance, how it is created in Buddhism with the name of Savitri Mantra with certain words being replaced having basic similarities. On continuing, he further discusses how the yearly Buddhist texts mentioned only three Vedas. No mention of Atharva Veda is found implying that it was amalgamated much later. He added that Lord Buddha delivered his teachings at important centres. Either those being then capital cities or so. Dr Kumar states that records of Kosala Mahajanpada, are found in Palitexts being the place where Lord Buddha gave his highest number of lectures. Its capital, Sravasti, has been accounted with around 910 lectures.

After that the Chairperson, Prof. Bimalendra Kumar, presented his views and observations on the theme of Theravada Buddhism and Brahmanical Vocabulary. He elaborated on the translation and portrayal of the vocabulary. He clarified how the translation should be conceived, focusing its accuracy in terms of its social context and the era it was composed, not in today’s sense/context. He also stated that in later years mention of five pitakas are evidently found instead of just three. He specifically focused on the adoption of Brahmanical Vocabulary in Buddhist Literature and vice versa.  He thanked both organizations for their exemplary efforts to provide such venues for learning and sharing. He thanked Dr. Kumar for his informative and useful presentation. A good amount of response and feedback was received from the audience. The resource scholars thanked the organizers for arranging the webinar.

At the end of the webinar, Dr. Anantashutosh Dwivedi, Director General of Heritage Society, Patna extended his vote of thanks. He thanked the invited speaker, Chairperson, Prof. Neeru Misra, Prof. Asha Shukla, participants and other officials for their active support for making the programme a success. Dr Dwivedi expressed his gratitude for both organizations' constant support and encouragement to help in shaping such enriching sessions. He also mentioned how these webinars prove to be beneficial for people from different backgrounds and similar interests. From PhD scholars, research enthusiasts, academicians to students preparing for competitions. Dr. Dwivedi requested all the participants to fill the feedback form for e-certificate for participants.

Azad Hind Gulshan Nanda, Director, Buddhist Heritage Research Institute of Heritage Society moderated the session and Dr Ajay Verma, Registrar, BRAUSS, Mhow was the Administrative Coordinator. This enlightening webinar was attended by a number of participants. It was broadcasted on different social platforms making it available to the audiences in every possible way. 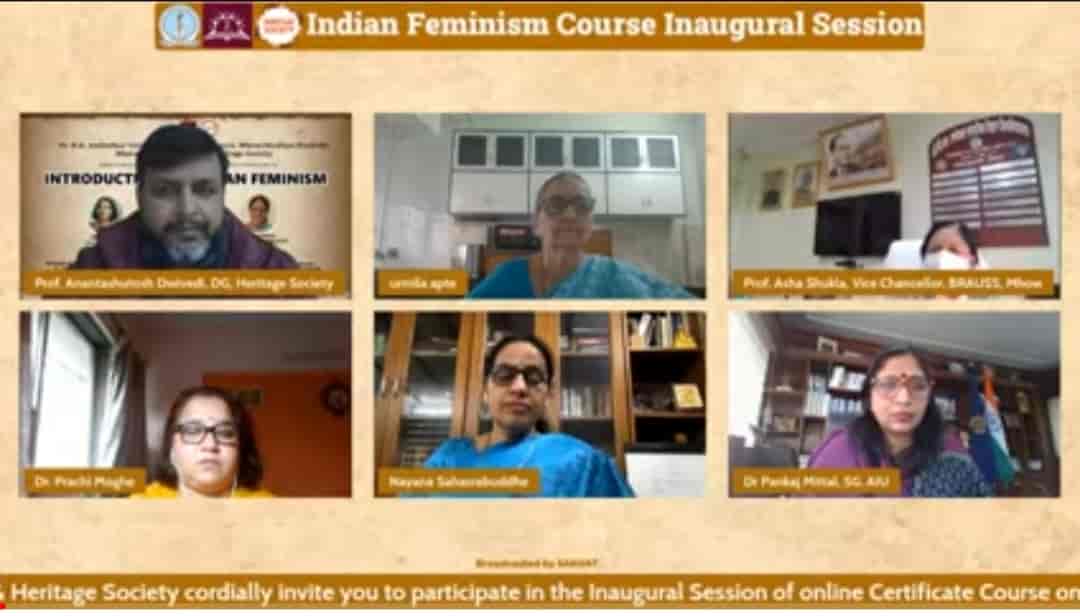 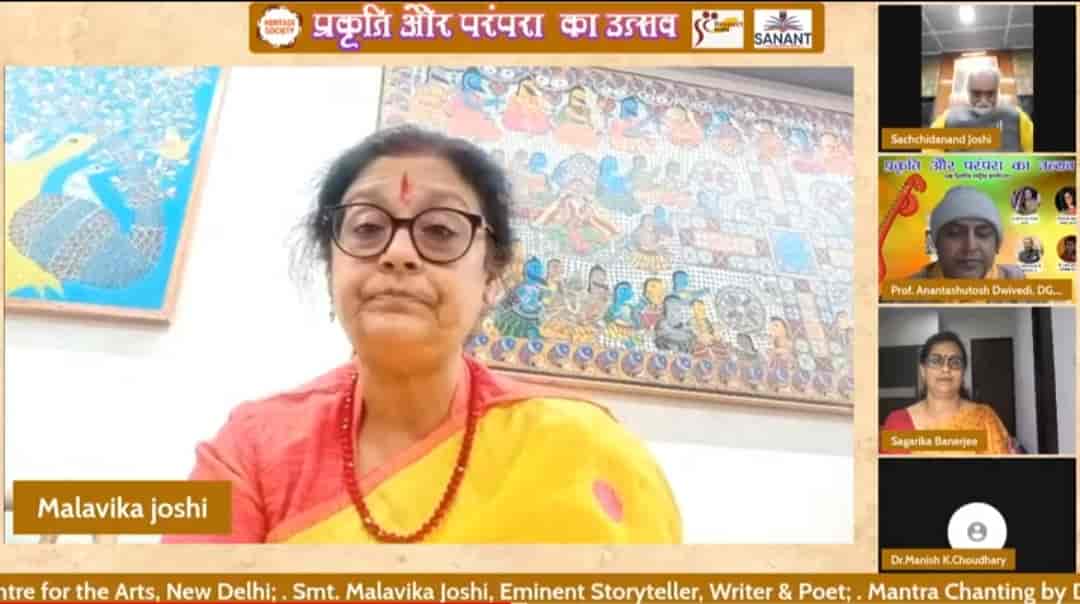 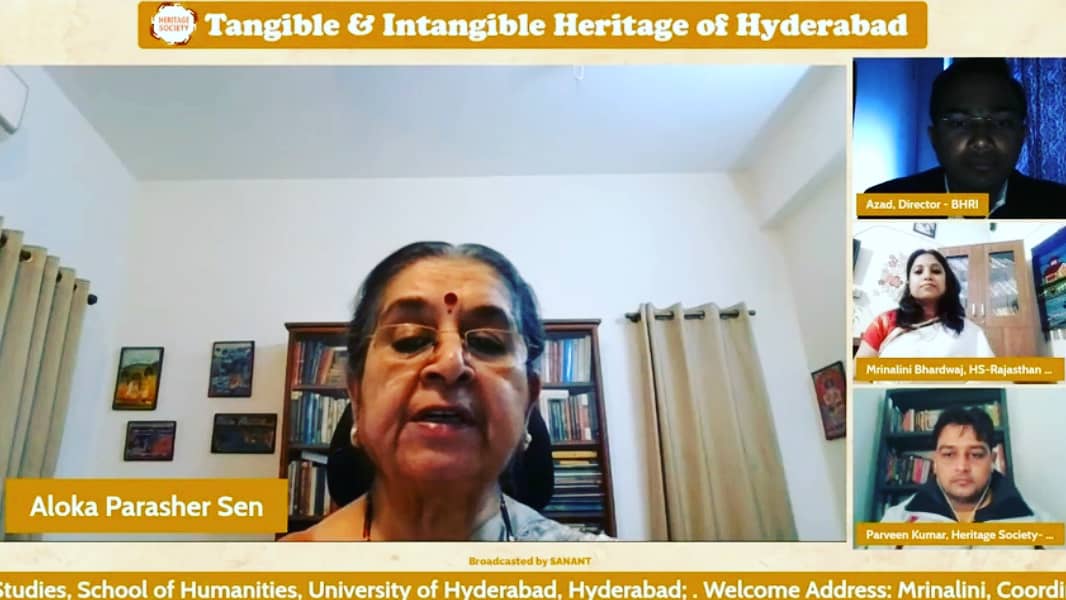 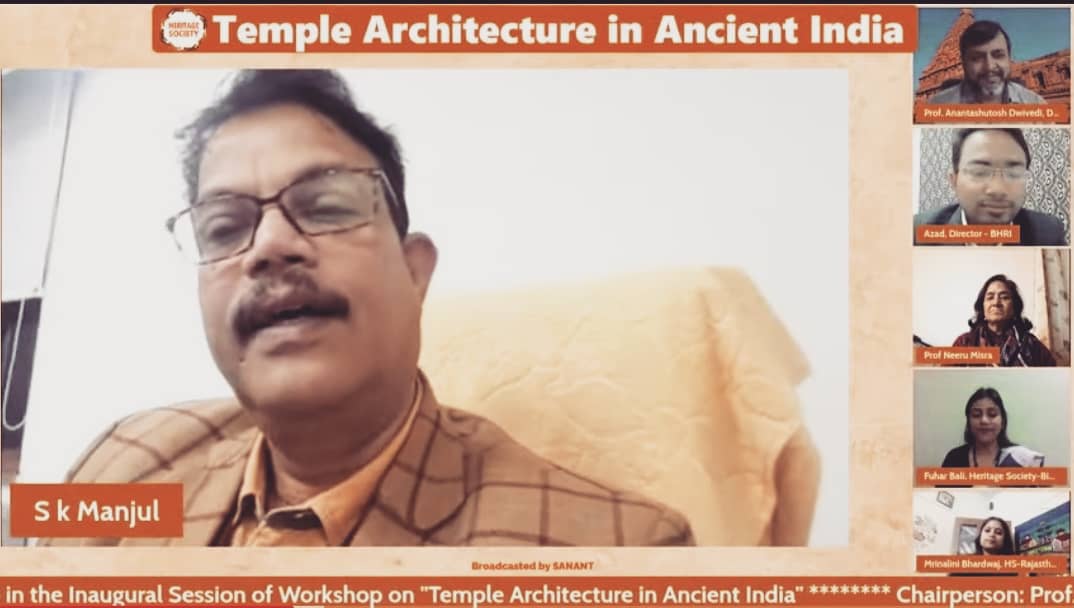 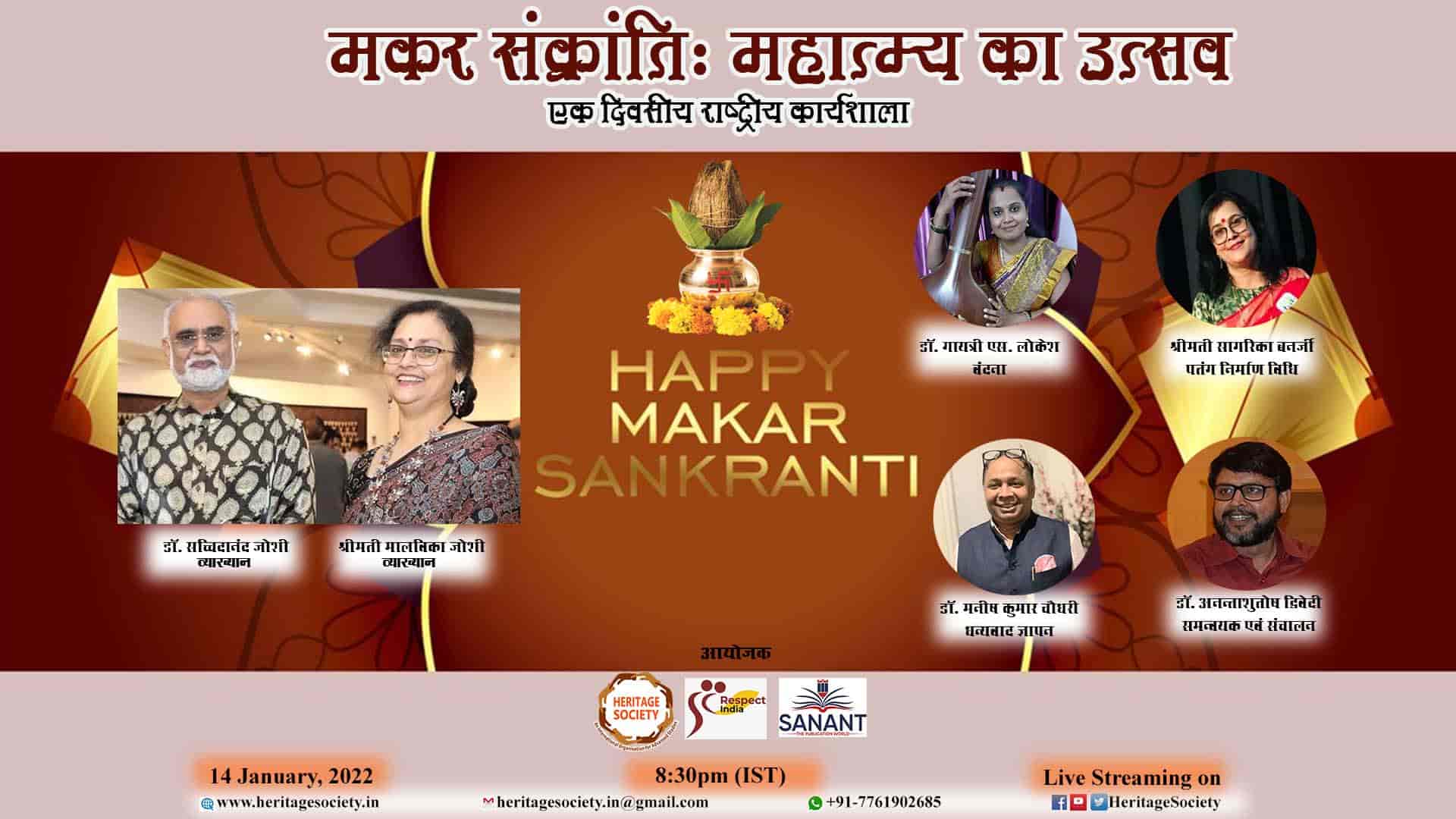